482. My Typical Weekend in Multicultural Toronto 2014 (with video)

Someone asked me the other day if I went to all the festivals in Toronto. Yikes! I once counted one year’s worth of free or nearly-free ethnic festivals and events. There were over 700 of them in my web-site alone.  And there must have been many more. 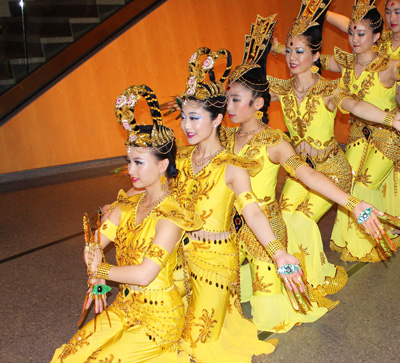 No I don’t go to all the festivals. I only go to about six a week if I have the time. I was going to festivals here long before starting a blog in 2010, so what I miss one year, I might see another year. I saw my first ethnic festival, a Chinese lion dance in Toronto in the 1950s.

So what’s a typical week for me? Weekends are when most things are happening and this past weekend was no exception. On Friday, I was at the Bata Shoe Museum for its Silk Road event. I have lots of pictures of Chinese dancers but the Chi Ping dancers there were superb – like dancers I’ve seen in China. 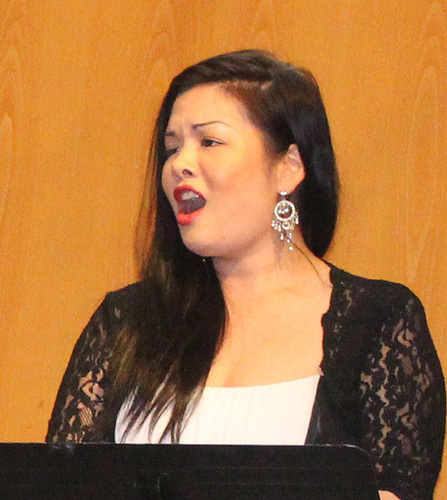 Mezzo Soprano Erica Iris brought memories of my summers in Mongolia with her amazing range and throat singing. She was excellent. Most of the performers were very good. 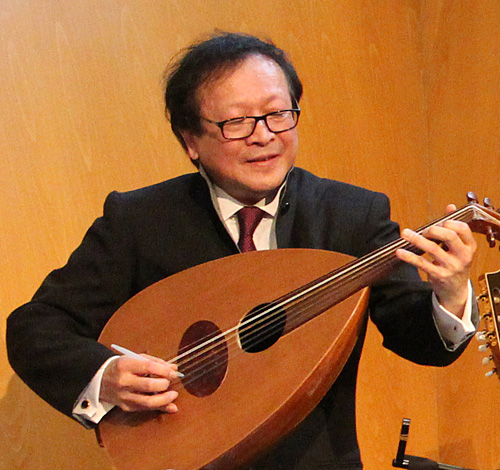 Wonderful also was Prof. Chan Ka Nin of the U. of  T’s Faculty of Music who accompanied her and elucidated us on the music of the Silk Road. Another plus was finding myself seated beside Anne Harper, a fellow aficionado of multicultural events. She originally came from Guyana. 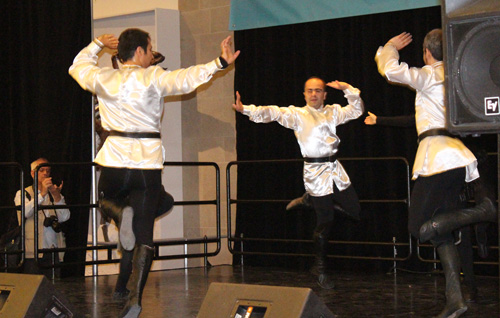 On Saturday, I went to the Iranian Heritage Day at the ROM and wasn’t the only person who loved the Araz Dance Group from Azerbaijan. These Azaris were the only performers who got a standing ovation during my three hours of watching. The others were good too, but not that good. This is the third group of Azeri dancers I’ve seen in Toronto and they have all been exceptional. I wondered why, as I watched their leader teach the basics to some of the many spectators later. Can anyone tell me why? 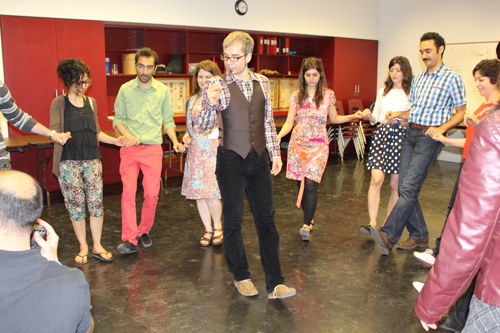 I also loved the flamboyant playing of superb violinist Arya Saaber. He jumped and almost danced onto the floor close to his audience. All the while he was playing with great passion. 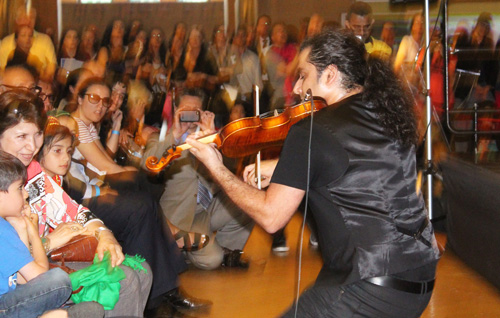 After the main stage performance, I saw a charming group of musicians from Iran. Alireza said they were playing Qashqai music from a place near the city of Shiraz. I missed his girlfriend Mitra’s dance. Alireza later sent me a video of the two of them dancing together to Qashqai music. You can see the video at: http://youtu.be/CBrDotmYWig . I wondered if Qashqai is considered one of  Toronto’s 140 languages. 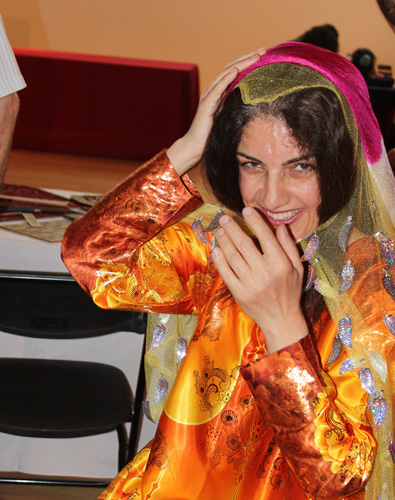 A group of children in the costumes of several regions of Iran also sang. 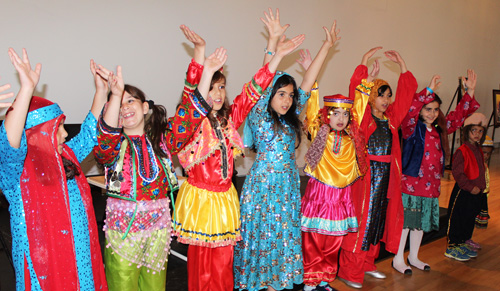 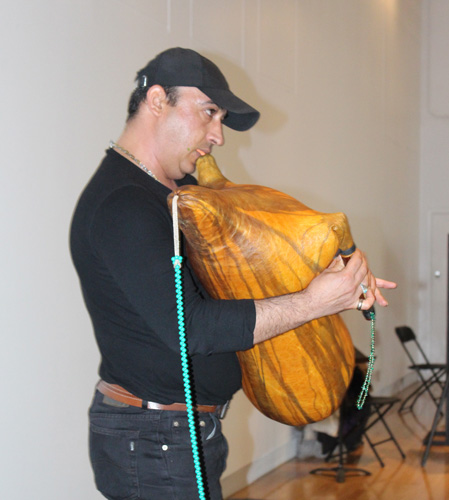 And among the many Persian crafts, Sheida showed her beautiful calligraphy. And there was much more. The ROM hosts some of the best, multi-faceted  festivals. 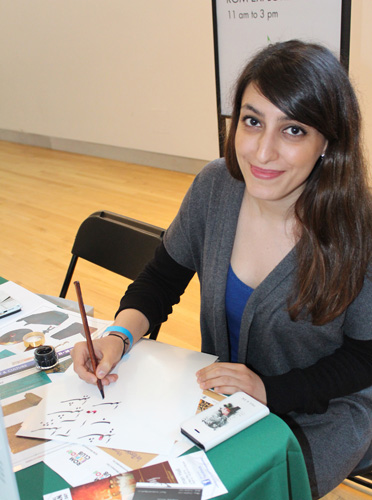 On Sunday, my Doors Open day started at the spectacular Jing Yin Temple on Brimley Road. Wow! It looked like something out of Beijing’s Forbidden City. And talk about great organization! Friendly volunteers in red directed cars to parking, and greeted us at the door with tea. Lions danced, offering us all good fortune. 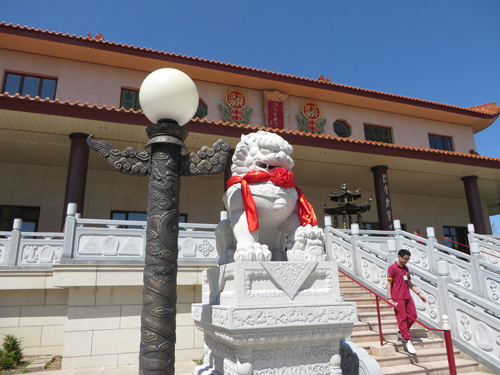 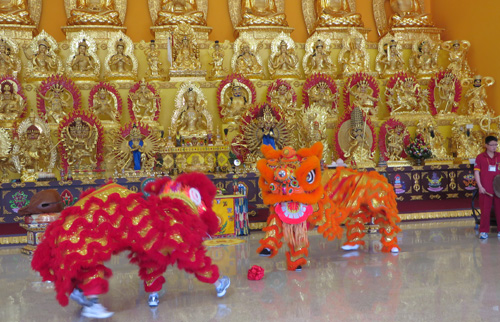 The guides said today was the only day we could take pictures inside. They told us about the construction, the history and the meaning of the symbols. The wall opposite the main door was covered with handsome-looking Buddhist and Hindu statues, some uniquely Tibetan, and some with many arms and heads. Some ferocious faces were among them.

You might notice the statue of the sect’s founder among the statues here and in the basement. Living Buddha Lian-sheng (Grand Master) was born in 1945. The sect’s headquarters is in Seattle. 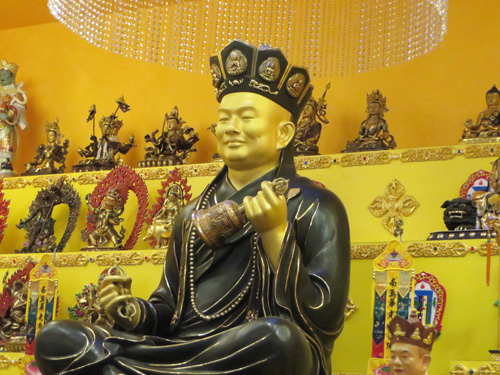 You probably know that Buddhism developed from Hinduism. It is still developing. A large poster nearby gave names for each of the gods and saints.

A guide told us the building and statues were designed by Master Lian-xiong, with heated exterior stairs to minimize ice build-ups. It had aluminium ceilings and window frames so the building will last at long time. 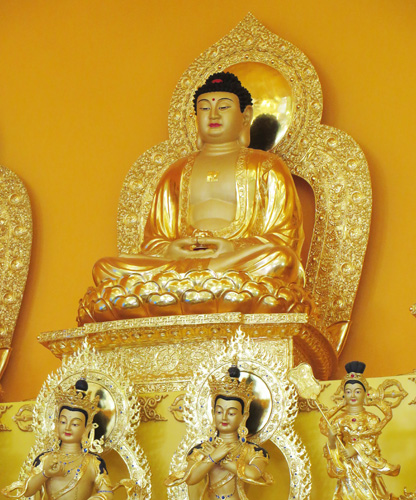 The main Buddhas are of gold-plated bronze, so heavy it took cranes to move them into the building and 18 steel I-beams to keep the structure from collapsing from the weight. Much of the construction was done by volunteers and financed by donations, guides said. 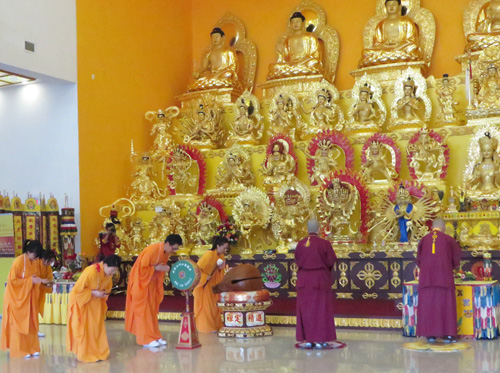 The lions were followed by a procession of robed leaders chanting prayers in Sanskrit and ringing gongs and bells. I could do a whole blog on this temple alone. But you can go there yourself any day between 10am and 7pm to see it for yourself. 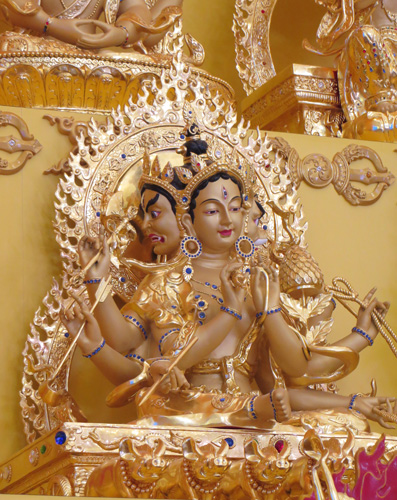 You might not get a guided tour but you can see the building’s splendour and try to identify the different statues like the elephant-headed god Ganesh and a Goddess of Mercy yourself. Worship is on Sundays at 3pm, usually in English and Mandarin.

From there, I went to the First Narayever Congregation, a Jewish synagogue, where a guide was showing how to follow the life of one of its founders from old steamship records. That was different and interesting. She also showed us how a wand is used to read the Torah to avoid touching it by hand. 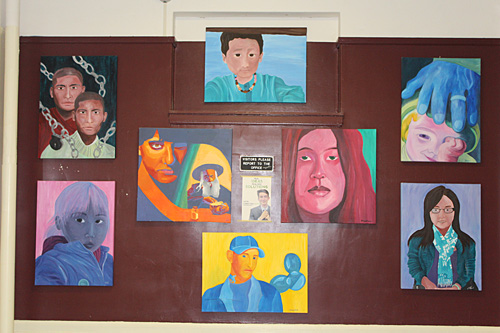 Next was Parkdale Collegiate. I chose to go there because it has had many Roma and Tibetan students and I was curious. Some of the displayed student art work showed Nepalese and Tibetan flags, and a huge mural was full of multiracial faces. While nothing much was happening, it too was worth the visit. 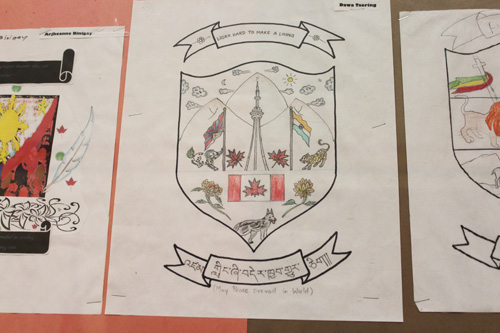 I spent more time at the Sufi Cultural Centre because I had many questions. I had taken a comparative religions course in college and was fascinated with the meditative Sufis and their silent worship. Guides at the Sufi centre spent a lot of time explaining, for example, about the segregation of women during worship. Women usually sit on a platform at one side of the room here. Actually, the Prophet did not separate them originally, said one guide, who was patiently answering my questions. The Prophet separated them at the time for their own protection. Men and women are equal here. 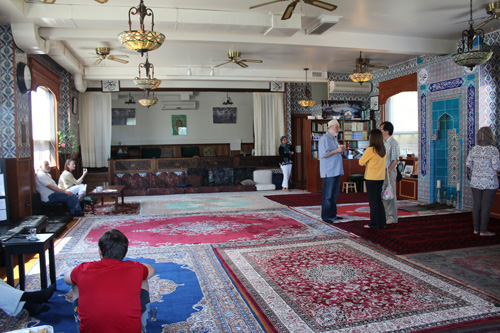 Members of the Centre meet every Saturday from 7 to 11:30pm. The service has prayers in Arabic, meditation, food and music. During the music, some members might start whirling, an attempt to “tame one’s ego.” Guides showed me the mihrab, a beautiful tiled niche in a wall that indicated the direction to the sacred city of Mecca, towards which they all pray.

Some of my friends keep telling me that they don’t know if they’d feel welcome in a mosque, but the guides insisted that outsiders are welcome. I certainly felt gladly received.

All these visits left me with a very superficial knowledge of other cultures. But they were an opening of doors to places I might want to learn more about later. I made  new friends. I learned what was happening in my city. We are so fortunate to have these rich cultures here.  I had a wonderful time, as usual.

Please let us know your adventures in Multicultural Toronto too. Write to us at: ruthlormalloy@gmail.com.