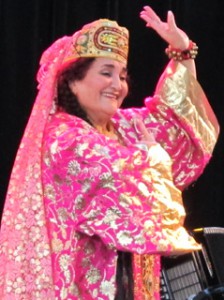 Wow. What a great multicultural weekend. I was in three continents with  great music, great spectacles and lots of colour. The Ashkenaz festival had  Jewish music, Muslimfest had friendly people, and Indian, Spanish, and Indonesian music played at the CNE. Then there was Brazilian Day, and the Hispanic Festival with music from Mexico, Ecuador, and Chile.

How many countries did you go to this Labour Day weekend?

Brazilian Day as usual was difficult. I arrived late and couldn’t get close to the stage. I couldn’t see what was going on. I could hear a talent contest in progress but wasn’t interested in its music. Still, Brazil had an amazing number of food stalls and I wished I had more time so I could sample my way back down Yonge St. to the subway. 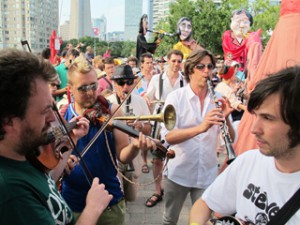 My Ashkenaz adventures started in an Indigo book store where Toronto’s Klezkonnection was playing. Okay, so only six out of their usual 15 band members were present and only a dozen chairs were there for us to sit on. But it was special because so few people were present. It seemed to be a concert just for us and the Klezmer music was very good. Unlike Harbourfront, no noisy air planes and kibitzers interrupted our pleasure.

On Saturday, the amazing, quiet-spoken Abayuda group from Uganda was on the WestJet Stage at the Ashkenaz festival at Harbourfront. Its music reminded me of calypso. The two Africans spoke a lot of Hebrew. I loved hearing the bit of history they shared. The Abayudas started becoming Jews in 1919 and the group grew to 3000. Idi Amin banned Jewish practises and these Jews went underground. Now there’s a revival. You can look up more of their story on the Web. 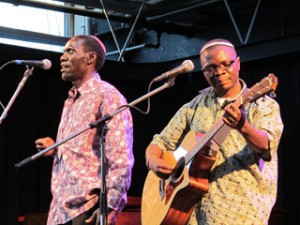 I missed most of the Shashmaqam’s show. They are Bukharan Jews from Central Asia. I was enjoying the previous Ventanas group with its flamenco, Balkan and Sephardic music so much, I arrived too late for Shashmaqam’s queue.

The Mexican group Klezmerson was excellent – its melancholy Klezmer music played out with guitars (no trumpets, clarinets, violins, etc.). Lyrics were in Spanish. It was obvious other spectators enjoyed the Ugandans, Bukharans, and Mexicans too. 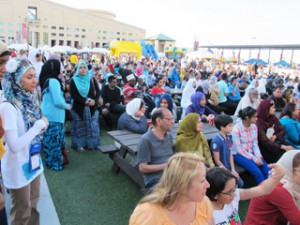 Of course, the Ashkenaz Parade was worth seeing. Many of the performers joined it. Anyone could join it. This year, it incorporated an old folk tale about a demon. The next Ashkenaz festival won’t be until 2014, alas.

The Muslimfest was in Mississauga’s Celebration Square. Friendly people assured me that parking was free, and it was. Children were playing in the fountain and in the bouncy castles. Most women wore head coverings but no one seemed to mind that several other women and myself didn’t. A little train took kids and their parents around the grounds. The goods for sale were indicative of Muslim modesty – lots of women’s clothing and beautiful head scarves. The food included kabobs, freshly-squeezed sugar cane juice, and Malaysian pancakes. The “Taste of Bosnia” stall was interesting with its European pastries. 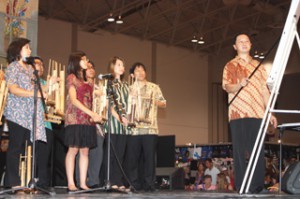 A man on the main stage was making jokes while hundreds of people sat, ate and laughed. One man in a book stall asked if I were Muslim and when I said no, he handed me a free book on Islam.

At the CNE, an attempt to combine a classical Indian dance and a flamenco dancer on stage didn’t thrill me. Even though there were similarities as they danced together, having to look from one to the other tended to dilute the passionate effect of each excellent dancer. But the couple dozen Indonesian musicians that same day were wonderful. They rattled angklungs. These are made of bamboo and each produces one note, a quiet, soothing nature sound. Each musician played two of them. 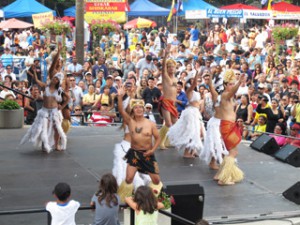 The Hispanic festival was at Mel Lastman Square. It was crowded, but everybody could see. Most people were seated because the square is well-designed. Photographers usually get right up to the stage there, but I was late. I easily found a spot where I could shoot pictures from above. The dancers were good and colourful as usual.

For the first time, I heard the Imbayakunas  group with its music from Ecuador. When you hear indigenous Andean music in Toronto, it’s usually from buskers playing pan flutes. While a pan flute played the melody, this group had a keyboard, guitars, violin, and other electronic instruments. It had the rich sound of a symphony orchestra but it was Andean music and it was splendid.

All this music and fun were free except for the gas, TTC tickets, ice cream cones, and a taxi on one occasion. The Ex was busy on Sunday and buses didn’t stop in front of Harbourfront. They were too full.