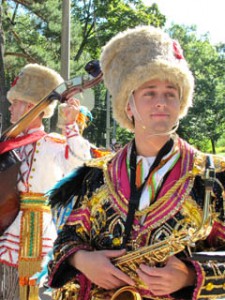 This past September 14-16 weekend, I went to five festivals, two parades, and a very spiritual Tibetan event.

The Ukrainian parade was better than the Polish. It was longer and very colourful, filled with hundreds of dancers and school children in costume. Many of the women wore fetching garlands on their heads with banks of coloured ribbons down their backs. Philadelphia’s Fralinger String band added a lot of sparkling uniforms. They wore foot-high “fur” hats on their heads. Two musicians even carried bass fiddles as they marched.

The politicians seemed to favour the Ukrainians even though there are more Polish than Ukrainian voters in Toronto. At least five elected officials were in the Ukrainian parade, most wearing fancy, embroidered Ukrainian shirts. I didn’t see any such officials in the Polish parade. 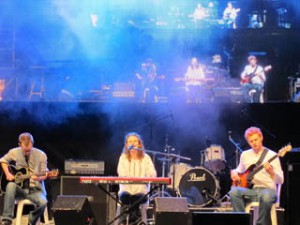 The Polish parade along Roncesvalles did have some lovely touches. Last year and this year, it included a platoon of people in wheel-chairs. They were not forgotten. The Ukrainian festival was more crowded than the Polish with more rides and vendors’ tents. Both had plenty of music. Both had barbecued pig on spits and plenty of pierogies. The Ukrainians had a Ferris Wheel and fancy electronics. However, if you like to polka, head next year to the Polish. 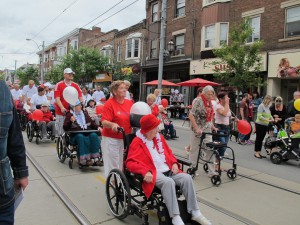 The Mexican Independence Day festival seemed lost in the vastness of Nathan Phillips Square. A woman in black Mariachi garb and a wide Mexican sombrero was singing on stage when I arrived. Female dancers flounced their wide colourful skirts and then members of the audience got up to dance as a singer crooned. A best-costume contest for children and then for adults followed. It was all done with enthusiasm. The food was good too. My tostada was delicious and only cost $3.00. It was worth a visit if you are as fond of Mexico, as I am. 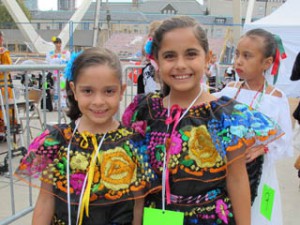 The singers at the Christian Voices of Nations in Yonge-Dundas Square seemed more inspired at worshipping than at entertaining. Only the people in the front row showed any enthusiasm and waved their arms in support of the musicians. I didn’t stay very long. There wasn’t much to see or do.

The Korean Harvest Festival in Mel Lastman Square was full of people and stalls. You had to join a queue to spin a wheel of fortune and to get a bag of free popcorn. Stalls were selling rice cakes in spicy tomato sauce and yes, deep-fried Mars bars. Real tattoos were going for $30. Children were jumping rope and competing in tugs of war. Merchants were selling the same animal caps at half the price as the CNE. One merchant was demonstrating smokeless barbecues for cooking indoors. Bargains were everywhere – except the roast corn that cost $2 or even $2.50 a cob. Other festivals sell it for $1.00.

One stall was encouraging native English-speakers to teach English in Korea. A potter demonstrated a pottery wheel.

On stage, a team of dancers tapped to the Korean folk song Arirang, A luxurious fan dance followed, and then a fashion show of traditional Korean clothes. They were all good. A lot was going on and next year I will take more money for shopping. 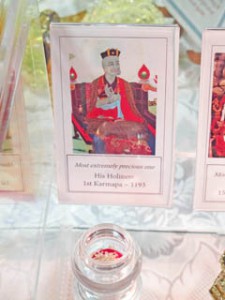 The Tibetan relics were a different kind of festival. I arrived early and was greeted by non-Tibetans. Tibetan monks arrived later. Worshippers arrived and bowed before the statue of the Buddha. They circled the displays slowly and studied the relics. They meditated before many of them. The monks blessed them as others held what looked like metal goblets over each worshipper’s head.

The relics  were the remains of spiritual leaders considered very holy and powerful. Some relics were hundreds of years old. I saw bone fragments and tiny pearl-like remains and ashes. These are usually buried in Tibetan monasteries under stupas or tiny pagodas.

A very interesting video was playing outside the shrine room. It explained in English where the relics came from. It all brought to mind another religion that also believes in the power of saintly relics.

My multicultural weekend was thought-provoking and fun. How was yours?